An interesting conversation with a 5 1/2 year old

Yesterday, Miss M brought up the concept of bad brain.  She told me that she has a bad brain that resides in the middle of her forehead area.  She said that this bad brain gives her thoughts like "this is dumb" or "I don't like you."  She then went on to say that she has a good brain as well, which makes up the rest of her head.  This brain (the good one) makes sure she doesn't actually say what the bad brain wants her to.  It stops her mouth from saying those "bad" things and instead replaces it with good things.

I thought this was an interesting take on the idea of good conscience and bad conscience.  We discussed this with Daddy last night at dinner and he told Miss M that his grandmother, the awesome Mumie, would always tell him as a little boy that he had a "bad man" on his back when he was misbehaving.  I told her as well that you could also look at her "bad brain" idea as being the devil and the "good brain" is God.  She didn't totally agree with our added comments.  She simply said "It is just your brain, Mom!" 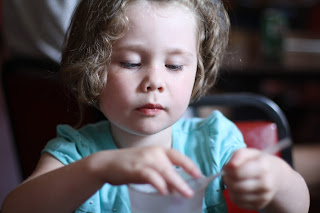 AEK
Hello! My name is Angie and I am a SAHM to two lovely but always runny noses girls. 8 year old "Miss M" and 3 year old "C" are my bosses. I am happily married to the awesome "J." I also blog at www.tilliestales.com which is a transcription over the course of 10 years of my grandmother's 1930's diaries.

Get Your "Queen of the Snot" E-Mail Here